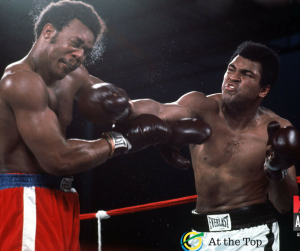 I was fortunate to have a college football scholarship to play at a small engineering school in Golden, Colorado.  Being a sports jock, my buddies and I followed most major sporting events.   On March 8, 1971, at Madison Square Garden, Muhammad Ali fought Joe Frazier in what was known as ‘”The Fight of the Century”.   It featured two skilled, undefeated fighters, both of whom had reasonable claims to the heavyweight crown.  Joe Frazier won on points but I still remember Ali’s response to the sports announcer when he asked if Ali would fight again for the heavy weight champion.  Ali said, “I will only go out at the top“.

While working at my first and only job after college, I was attempting to create a secondary revenue stream by raising cattle.  After purchasing my first four momma cows, three of them died.  I was extremely discouraged and I also had to withstand some ridicule from my fellow workers as they gave me some verbal jabs.  I remembered the lesson I had learned,  “I will only go out at the top“.  Purchasing more momma cows and baby calves led me to have the money needed to move from Wyoming to Oklahoma to attend Bible School several years later.

After starting the moving and storage company, I only had two trucks.  After a series of events, both trucks were not drivable.  One truck was stuck in the mud with a carburetor problem and the second truck had a clutch or transmission problem.   I was extremely discouraged and I started to think how easy it would be for me to take a job offer from my dad to return back to farming and ranching.  I remembered the lesson I had learned,  “I will only go out at the top“.

If you are a business owner or working in the marketplace, you will certainly experience some times that do not go as you had hoped.  You will have the chance to give up or go on. My experience has taught me that we need to develop resilience to adversity.  I  cannot easily give up or give in to these pressures.  It seems that if we don’t learn to stand our ground we can easily be stopped, as we will always have another challenge, another obstacle to overcome.  And it seems at times the attacks come in strong waves from more than one direction.    When this happens, I am very sure I am under a spiritual attack intended to take me out of the game.   In stead of letting the attacks take me out of the game, I become empowered even more to only allow myself to go out on the top.   I may sound funny, but I actually become encouraged when these types of attacks come, because I know that the God I serve is more powerful than any spiritual attack that could be thrown at me.

Would you share some of the spiritual and physical attacks that you have had on your business and how you came through them.   I think we need to be careful to not convey the idea that we don’t have doubts and discouragement.  But that in the end, our God is more than enough.

Consider joining us on a Business Mission Trip, when the time is right.