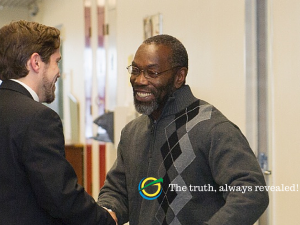 A man spent nearly 40 years in prison for a murder he did not commit. The truth came out! Ricky Jackson was convicted at age 18, but Jackson, now 58, was exonerated in November after a witness, now in his early 50s, recanted his testimony.  Jackson’s attorneys say their client is believed to have served the longest prison term in the US for someone wrongfully convicted. The truth came out!

Honesty and integrity are fundamental to the growth and prosperity for any business that wants to succeed.  The manufacturing company that I own, produces and sells component parts to some very large and well known international companies.   Accurate documentation in making these parts is critical.  Creating a company culture with integrity includes setting high expectations and willingness to impose discipline if the company integrity is intentionally compromised.  It could be easier to understand the temptation when you realize that selling an order of good parts would generate $20,000 in sales, compared with $80 if sold to the scrap company.   Our customers trust us.  This is not our law!  It is God’s law! “THE TRUTH WILL COME OUT”.

There is no such thing as, “they will never find out” or “no one will ever know“. If you are thinking this way, you are lying to yourself.  “The truth  will come out“.  Maybe not now, maybe not even when you are alive, but at some point it will come out.  Unfortunately, the people normally hurt the most are those closest to you.

Recently as part of a video testimony at my home church,  a young man shared how the church had virtually saved him from destroying himself. As he shared openly (to help others), his dad was described as a strong man with a military type personality.  The dad had strict rules in everything, including the family’s church attendance.  The young man shared that when he was in his early 20’s and had moved out of the house, his mother told him, that for many years his dad had been living a double standard in his loyalty to his marriage.  Is there anything more devastating to a young man to learn that his father was blatantly living a lie?  The truth came out!

Your workers want to know you are truthful with them in big and small things:

We need to live like we are in the family of God.   Share your thoughts!   Give your opinion! Encourage someone today in the area of being truthful.

For those that might be interested in sharing some of their  life experiences in a foreign audience, consider being a part of a Business Mission Trip.